Whatever your dream leatherwork project looks like, there is a book in here to help you get underway.

Whether you are starting out on your leatherworking journey, or looking for patterns for projects, we have a book for you.

There are books to show you how to make your own tools, tan a hide or complete hand sewn projects among other things.

Bush Leatherwork and More Bush Leatherwork are compilations of a number of smaller books, and represent a significant saving on purchasing the books one by one. They are also spiral bound, making them easy to work from. 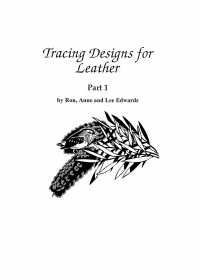